Edinburgh on Saturday night is like a gothic fairytale city, with glimmering silver lights in the trees, turrets & spires all shrouded in mist. Actually everything above umbrella-height is shrouded in mist, the deluge is biblical, quaint cobbled streets are grimy rivers, and it’s seriously cold. I’m staying with my friend S in her lush flat in easy walking distance of all the venues, so no excuse to gripe, even though the weather is frankly cataclysmic.

First event on my Spoken Word wish-list is PoeJazzi at Sweet Grassmarket, a medley of performance poetry featuring a different line-up every night, which I guess has pros and cons. I especially like Joshua Idehen’s strong words and surprising personas - “My name is Cupid and I am an alcoholic” - PoetiCat’s sad sensuousness and scarlet wellies, and the guy who sang about a shark with a peanut allergy. Cold weather affects people different ways; for me, its humour I crave. And soup. 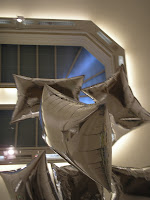 Sunday morning. The rain’s abated and the streets have a damply festive air – or would have if it weren’t for these grey clouds pressing like an obese stomach against the skyline of the city. The Promoters Breakfast is like a sweat-lodge but with fistfuls of flyers flapping in your face. There’s no coffee left so I make for the calm of the Andy Warhol exhibition and push silver pillows gently around for a while. Very therapeutic. I had a Warhol’s Marilyn teeshirt back in the 70s but never realised the artist’s emotional range. His friend Henry Geldzahler apparently encouraged him away from soup cans by saying “That’s enough affirmation of life. It’s time for some death.” I loved the early drawings, like visual e e cummings, and after a while began to see those hallmark repetitions as moments removed from linear time and abstracted into pure reality. Or maybe I just need coffee. 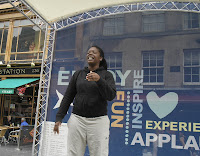 Off to find a café with mellow music & Sunday papers, then check out the festivality in High Street. It’s a bit like Las Ramblas and Glastonbury crossed: silver statues, strummers, buskers, beggars, bagpipes, and all the jingle-jangle juggling street theatre scene – including poet Kat Francois on a podium, giving a sample of her show. “I’ve exposed myself to strangers, I’ve shown my humanity” she says.

Personal exposure is an ongoing theme. Luke Wright tells what it’s like to be a ‘Poet and Man’ in 8 chapters, each featuring apt quotations (Simone de Beauvoir, Freud, Avril Lavigne…) witty anecdotes and bloody brilliant poems. My friend S, unfamiliar with the genre, is now a convert to performance poetry. No wonder Luke’s had awesome reviews, using words like "genius", “blinding talent”, “born performer" and “spearhead of the poetry revival." We rush back her flat to watch BB On The Couch, sipping Sancerre, until it’s time to go back to the Pleasance for Nina Conti, a ventriloquist apparently transfixed by the anal aspects of hand puppetry - vulgar but funny; less successful when she puts on a flat cap to be her grandfather. Home for pumpkin soup. 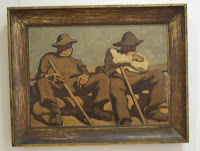 Monday already. S and I have breakfast at Valvona & Crolla, a posh Italian deli, and then on to the Gallery of Modern Art to see Richard Long, whose markings of ephemeral moments impressed me 30 years ago but seem disappointing and unradical now. It’s the permanent collection I most enjoy – especially the picture of “Two peasants resting” painted in 1922 by war artist Albin Lienz, which has a Don McCullin-esqe sombreness. My friend S points out that BB’s Liam takes a similar posture, proving that in a society deprived of war, conflict over a piece of toast can produce the same physical posture of resolute dejection. 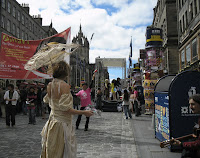 Today the sun is actually visible, so I walk back through the Botanical Gardens to Pleasance for Jude Simpson’s Growing Up Games: another brilliant hour of bouncy poesy and personal exposé, with some audience interaction and a few non sequitors like 'Anyone else ever ring the Insurance Helpline just to say the word “premium"?' I love her Spinsta Rap (‘I gotta crochet hook, I’m not afraid to use it’) and her conclusion: 'Grown-up-ness really means the ongoing journey of discovering more about ourselves and our relationships.'

The sun has brought out yet more crowd-pleasers and teasers: coffins, invisible men, brass bands, bagpipes, unicyclists, fire jugglers.. and did I mention the bagpipes? Even the binmen, wheeling their trophies through the crowds, look like street theatre. I check out the Book Festival over in Charlotte Square, then go back across the city to Zoo for ‘My Filthy Hunt’, because it got a 5-star review in The Scotsman. How the m******f**k**g f***k? did that happen? as any one of the cast might say. A sad foulmouthed weep-fest, on a par in terms of credible emotion with Dawn French’s “Titanic” spoof. The cast of four strip promptly then prowl around glaring at the audience, talking of sex, violence, violent sex, and The Meaning of Life. At this nadir moment I recalled Luke Wright saying when he was 15 he used to write about the meaning of life but now prefers to focus on significant details, like Central Trains.
I stop at Charlie’s wine bar on the walk back, where a woman on a mobile is telling someone “…the whole audience smelt like wet dog. I’ve seen some lovely stuff and I’ve seen some shit, I can tell you.” 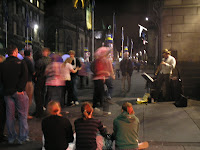 As it’s my last night, I’ve opted for trad stand-up at Underbelly: Rob Deering, a very funny comic who plays a mean guitar – mean in the sense of wickedly satiric. Leonard Skynard will never sound quite the same again.

Tuesday morning, drizzling again. Time for one last event: Ravenhill for Breakfast, half an hour of drama at the Traverse Theatre, different every day. Today’s is Armageddon, a powerful piece about two lonely people absorbed in their own isolation, recalling once again that recurring question: what does it really mean to be grown-up?

Lots to think about on the long journey south. Like the lady said ‘I’ve seen some lovely stuff and some shit’ and now I’m glad to be stepping out of Bath station to soft butterscotch-icecream tones of the buildings after the endless grim tombstone grey of Edinburgh, and seeing our comely rounded hills on the skyline instead of gaunt rocks. Peter texts me: cool pinot grigiot is waiting. And it is…
Posted by Crysse at 1:08 AM