Are we nearly there yet?
... Yes, we are. Happy New Year to readers & writers everywhere.
My 2007 diary - which depicts a preposterously stiletto-heeled, outrageously scarlet, thigh-high boot, I must have been in quasi-courtesan mode when I bought it - is already crammed with writerly things: summer festivals and conferences, autumn workshops and, most wonderful of all, Spring in Crete... Peter & I are going back to Chania to spend five weeks walking and writing, exploring coastal tracks and villages before the tourist season starts. And even before that, for me the thrill of spending January in Chile, leading creative writing sessions at a venue near Santiago (where it's currently 33 degrees, compared to 11 here...)
But though it's hard to keep my head in the wintry cusp of the old year, there have been some sweet and splendid moments: visits to friends, impromptu carols, walking Stourhead's Six Wells Valley, and an idyllic afteroon at The Cross Bath with Peter's family, playing in this hot open-air pool while the streets of Bath outside slewed with Sale shoppers. 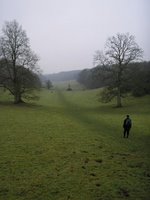 Well, Greek philosophy allegedly began with the notion that water is the origin and mother-womb of all things, so maybe this is an appropriate way to greet the year ahead. 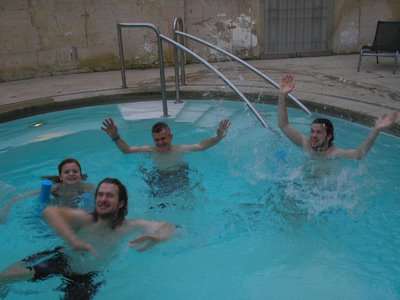 And as the old year begins its slow slouch to the exit like the last reluctant aunt as the disco ends, I'm once again pondering the curious appeal of blogging. Today's Observer Review (the reason I spend so much time in coffee houses is of course to save on newspapers) raises the question with a handful of writers who admit to the habit of journaling. I like best Kate Kellaway's image: "For me it is like placing a rock in a stream, a way of interrupting the flow of time, diverting it - having the comforting illusion that it has not escaped forever." A virtual pod-cast of thoughts and impressions, made by a magic damn. I like that.
Posted by Crysse at 1:06 PM