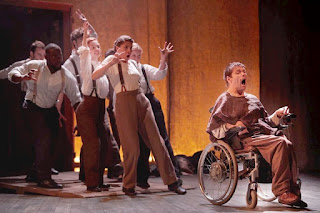 The Elephant Man at Bristol Old Vic is a Theatre School production directed by Lee Lyford with Jamie Beddard in the title role of Bernard Pomerance's 1977 play. Joseph Merrick, whose appearance led to the nickname of the title, became the pet project of the London Hospital from 1886 when he was discovered aged 27, until his death in 1890.  Jamie Beddard is unforgettable in this role: he has a way of transmitting extreme anguish silently with the impact of that howling mouth of Francis Bacon's painting Head VI.

Merrick appears at first as a fairground freak and Caitlin Abbott's clever set design evokes this aspect of intrinsic containment and objectified existence, whether in a tent or a hospital ward.  Medical diagrams, projected captions, and poignant cello playing live on stage enhance both the historical actuality and the emotional impact of a story of surprising complexity: the play combines the Heart is a Lonely Hunter theme of an outsider who becomes a mirror to the private struggles of those who connect with him, the viciousness and prurience within Victorian society,  and the existential arbitrariness of chance, whether lucky or unlucky.

There's an insightful moment when Merrick attempts to argue with his benefactors over the dismissal of a nurse for peeping at him through the curtains. They assure him it is for his comfort.  If all that stared at me were sacked there’d be whole towns out of work Merrick says lightly and then with real concern asks if the sacked workers' children will have to go to the workhouse. 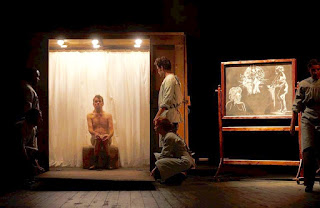 Even in the safety of the hospital, Merrick's status would have remained as rescued freak without the wonderful Mrs Kendal, leading light of the Victorian theatre, whose genuine friendship opened the doors for polite society to shower Merrick with gifts he couldn't use in a contest to be the most open-minded. But there's a limit to what's allowed this man, and this is reached in a memorable and moving scene.  Gráinne O'Mahony as Mrs Kendal is outstanding even in this excellent cast of young actors. It's on until 7 July - book before it's sold out! images: Mark Duet 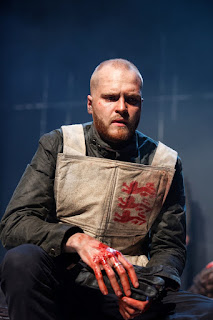 Another towering central performance in an impressive production: Henry V at the Ustinov, a Shakespeare at the Tobacco Factory production directed by Elizabeth Freestone which takes a very modern look at a play mostly known for its Crispin-Crispian speech and vaguely associated with valour. Ben Hall, outstanding even in a mostly strong cast, creates a character pushed into the kingly role and making the violence permitted by power his new drug of choice. Certainly the historical king invaded France for no good reason and some of his battle tactics have been reappraised as war crimes: an American 'trial' in 2010 argued the mass slaughter of French prisoners breached medieval moral codes of conflict. The ruthless punishments delivered on Henry's orders are not only referenced but delivered on stage in this graphic and visceral production, in which brutality would have overshadowed the comic relief of the foot-soldiers but for the charisma of Chris Donnelly as reprobate Pistol and the versatile Melody Brown. 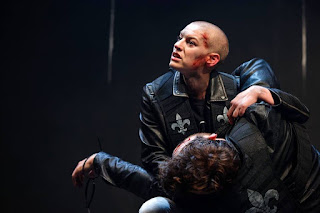 Also superb is Heledd Gwynn's Katherine, feisty French princess whose ultimate union with the English king was perhaps intended by the bard as some kind of reconciliation scene: her response creates an unforgettable lingering moment, one of many directorial touches that make this a memorable production from the start.  Lily Arnold's set design inspired by modern warfare seemed to me slightly 'over-thinked', its multi-purpose manipulation distracting from the dream/nightmare-like atmosphere otherwise very effectively developed, but I did like the costumes - realistic enough to evoke personality but very slightly weird. It's an interesting time to be reviving a play with so many themes that chime in our own era - cross-Channel hostilities, nationalism, and the line between leadership and self-seeking aggression - and overall this is much too good for me to fail to recommend, but be aware it's not easy viewing. In Bath until 21 June and then the tour continues until November: I found two and a half hours gruelling, I can't imagine how the cast will feel after six months. images: Craig Fuller 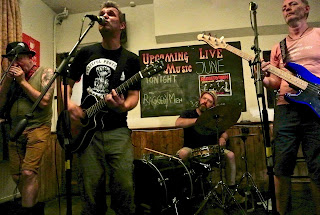 Meanwhile in Frome... a snazzy launch party at the Merlin for Dave Merritt's production photographs, a new exhibition from Steven Jenkins (aka Hogweed), and a terrific night of music at the Sun Inn, all on Friday. Hot new-on-the-scene band Back of the Bus got the dancing going, followed by the wonderful  Raggedy Men's stonking set of Undertones, Stranglers, Clash and more...  turning the temperature up to sizzling. To cool down here's a swan family at Stourhead from a peaceful walk on Monday. 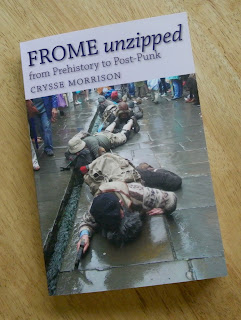 - oh, and the proof of my book arrived, so hopefully there will be copies for sale in the festival. Huge appreciation to my patient editor/publisher at Hobnob Press who waited for the delayed copy and then grabbed it and ran, metaphorically speaking, completing all the edits and design in a matter of days - he's made it all look wonderful. Cover image if you're wondering is the wonderful SATCO street theatre players completing the Great Ascent of Cheap Street in the 2012 festival.

And finally, for anyone missing the womanly touch in this post:

Filmed in 1949 on location in the isle of Eriskay in the Outer Hebrides, Whisky Galore was one of Ealing Comedy's most successful movies ever. It was taken from Compton Mackenzie's book of the same name, based on a news item from 1941 when the SS Politician, heading from Liverpool to the States, foundered on rocks and was discovered by locals to have a cargo of 262,000 bottles of whisky. The story of  unofficial salvage operations by excited islanders has both a Robin Hood charm and comedic aspects, as the night-raiding fisherman apparently wore their wives old dresses to avoid tell-tale stains on their clothes. This particular absurdity wasn't available to the 'Pallas Players' in the production currently at Salisbury Playhouse as, in homage to the post-war all-female Osiris Players, the actors are all women. Taking on thirty roles requires many hats and costume accessories to assist comprehension, especially as the islanders all speak extreme scots. Philip Goulding adapted the book into this stage version, which Kevin Shaw directed to emphasise the elements of farce on a simple but ingenious set by Patrick Connellan.